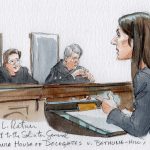 The Supreme Court heard oral argument today in a challenge to the map drawn in 2011 for Virginia’s House of Delegates. A group of African-American voters allege that the state legislature engaged in racial gerrymandering – that is, it relied too much on race when it drew 11 of the state’s districts, which would violate the Constitution. But the state legislators defending the map argue that, although race was one of the factors that the legislature considered, it wasn’t the only one. After roughly an hour of debate today, it seemed quite possible, although not certain, that the justices would reject the racial-gerrymandering challenge and uphold the map. 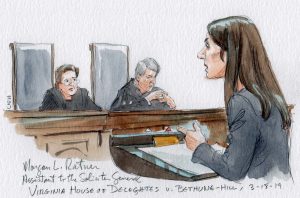 The lawsuit before the Supreme Court today was filed in 2014 by Virginia residents who live in 12 different districts in the state. When the legislature adopted the map in 2011, 55 percent of the voters in each of the 12 districts were African-American. The challengers contended that the legislature had illegally packed African-American voters into these districts, diluting their strength in neighboring districts and giving Republicans an advantage there.

A federal district court ruled for the state legislature, which had stepped in to defend the law. The challengers went to the Supreme Court, which agreed that one of the districts was not the product of racial gerrymandering. The justices sent the case back to the lower court for it to take another look at the remaining 11 districts.

When the case went back to the district court, the court threw out the map. It ruled that race had been the main factor motivating the design of each of the 11 districts. Moreover, the court found, the legislature had not shown that each district needed to have a voting-age population that was 55 percent African-American. The legislature appealed to the Supreme Court, which announced last fall that it would hear the case.

Much of today’s oral argument was devoted to a threshold question: whether the legislature has a legal right, known as “standing,” to appeal the district court’s decision to the Supreme Court in the first place. Arguing for the House of Delegates, attorney Paul Clement had several different arrows in his quiver. First, he argued, the House of Delegates and its day-to-day operations were themselves affected by the district court’s ruling striking down the 2011 map. The districts are not simply about elections, Clement insisted; legislators are also identified by where they come from – for example, the “gentle lady from Norfolk.” 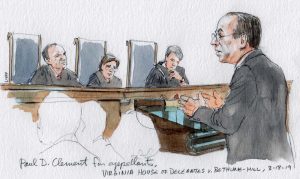 Justice Ruth Bader Ginsburg was skeptical. Changes in district maps are frequent occurrences, she pointed out. In fact, they happen every time there is a new census.

Justice Sonia Sotomayor was also dubious. She worried aloud that if the House of Delegates were allowed to appeal the district court’s decision in this case, it would mean that its counterparts in other state legislatures would be able to do the same in the future – even if, perhaps, the state’s attorney general might have a different position. And could individual members of the state legislature also appeal? Sotomayor asked Clement. It would be a “radical new step,” Sotomayor concluded.

Justice Samuel Alito suggested to Clement that he would be “very uncomfortable” trying to decide whether, under Virginia law, the House of Delegates can represent the state in court proceedings, or whether that is a role reserved for the state’s attorney general. Alito proposed that the justices should instead ask the Virginia Supreme Court to weigh in on this question of state law, but his colleagues did not show much enthusiasm for that option.

Justice Elena Kagan asked Clement whether, even if he is correct (and Kagan acknowledged that he seems to be) that Virginia’s attorney general previously was happy to have the House of Delegates “do the work” and represent the state in defending the districts, that means that the attorney general has permanently delegated the authority to represent the state to the legislature.

Sotomayor criticized Clement’s response as a “pretty extreme statement,” but Clement held firm, calling it a consequence of the state attorney general’s choice. 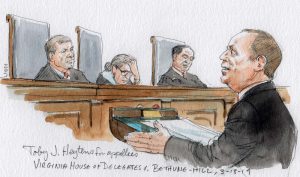 Justice Stephen Breyer was concerned that, if the House of Delegates were not allowed to appeal in a case like this one, partisan divisions in government might lead to inertia in redistricting challenges. Here, for example, the Republican-controlled legislature drew the challenged map, but the state’s Democratic attorney general decided not to appeal the district court’s decision striking it down. If you have a Democratic legislature and a Republican governor, or vice versa, Breyer posited, “nobody’s going to be able to attack it.” “It’s the House’s plan,” Breyer emphasized, and the governor won’t attack it “because he likes it politically.”

The justices spent less time on the merits of the racial-gerrymandering challenge, but they were equally divided when they did discuss it. Justice Brett Kavanaugh echoed the legislature’s argument that, when it drew the new map back in 2011, it was caught between a rock and a hard place. He told Marc Elias, who argued for the challengers, that the legislature would be “hammered” if it had aimed to have 52 percent, rather than 55 percent, of the voters in each district be African-American, because that number would be considered too low. How can the state comply with both the Voting Rights Act and the Constitution’s equal protection clause in this “narrow band between 51 and 55” percent? Kavanaugh queried. 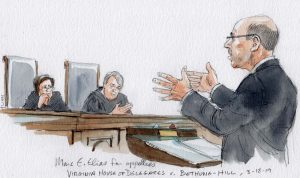 Sotomayor took a very different view. It’s hard to imagine that race wasn’t a primary factor driving the redistricting, she told Clement, when one of the lines dividing two districts was drawn “in the middle of the street with black houses on one side and white houses on another side.”

Roberts had an entirely separate concern, which he labeled the “elephant in the room”: the idea that the legal standard for determining whether race was a primary consideration in redistricting “depends heavily” on whether the trial court believes that witnesses are credible. In this case, Roberts noted, Delegate Chris Jones, who led the effort to draw the 2011 map, was regarded as credible at the first trial, but at the second trial – with a new judge – he was not regarded as credible, while expert witnesses were. If the case had come out the other way, Roberts emphasized, then the Supreme Court would have to defer to “questions of credibility that go the other way” instead. “Our review sort of depends on whoever gets here last,” Roberts concluded.

Clement agreed, telling the chief justice that when determinations about a witness’s credibility are “diametrically opposed,” the district court should be required to explain the change. Indeed, he argued, when a court “has gone out of its way to say that it’s particularly important to credit the good faith of the legislatures engaged in a very difficult task” like redistricting, there should be a higher standard “before you dismiss their testimony across the board.”

Breyer was less convinced. He reminded Clement that there are “hundreds of thousands, if not millions” of trials. If some of them are reversed on appeal, what rule should trial courts apply when cases return to them? One possibility, Breyer suggested, would be to “forget about the first trial” and just look at the credibility of the witnesses in the second trial in the abstract.

Justice Neil Gorsuch asked only one question today, while Justice Clarence Thomas was silent. Even if Gorsuch might normally be expected to be more sympathetic to the legislature than to the challengers, the challengers can take some comfort in the fact that earlier this year the Supreme Court rejected the legislators’ request to put efforts in the lower court to draw a new map on hold until the justices decide this case. And with the 2020 census looming, no matter what happens in this case, there will almost certainly be yet another map on the horizon.

This post was also published at Howe on the Court.