You are here
Home > Celebs > Panic! At The Disco’s Brendon Urie on smoking joints, ultra-violent videos and confusing his fans

We caught up with frontman and founding Panic! At The Disco member, Brendon Urie, about their new record ‘Pray For The Wicked’, his experiences on Broadway, confusing fans with jacket potatoes and his ‘relaxation’ tips for creating music. 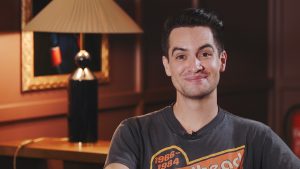 You just got back from Wales: The Biggest Weekend. Was it the biggest of all the weekends? “Yeah it was really cool. On the drive up from London we were talking about the setlist and I said, ‘Well, I don’t want to play those two songs so let’s play one we’ve never rehearsed, that we […]

The post Panic! At The Disco’s Brendon Urie on smoking joints, ultra-violent videos and confusing his fans appeared first on NME.