Donald Trump sought to connect his presidency to the nation’s prosperity in his first State of the Union address, arguing that the U.S. has arrived at a “new American moment” of wealth and opportunity.

The president largely dispensed with his trademark antagonism in a bid for bipartisanship, portraying his administration — marked in his first year by discord — as working to build a “safe, strong and proud America.” In contrast with polling that shows most Americans consider him divisive, he promised to unify the country “as one team, one people and one American family.”

“I am extending an open hand to work with members of both parties, Democrats and Republicans, to protect our citizens, of every background, color, and creed,” Trump said Tuesday in an address that lasted about 80 minutes. 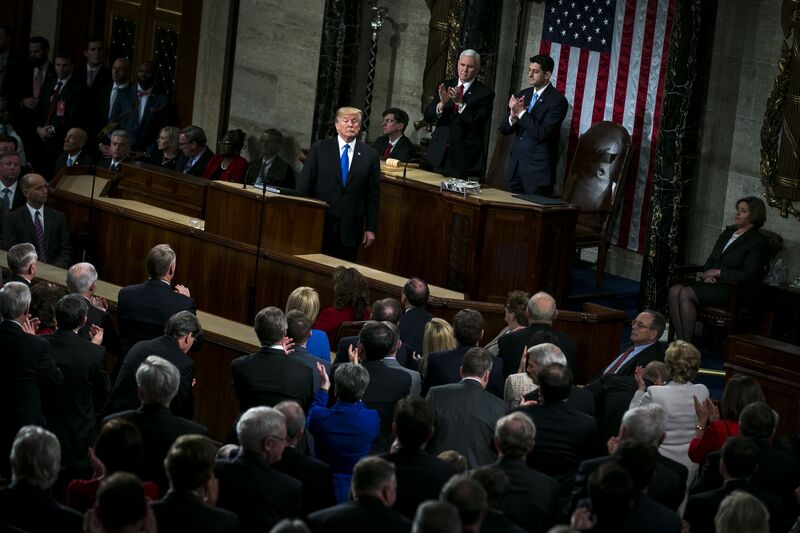 The White House billed the prime-time speech as part economic victory lap and part gesture across the aisle. Central to the president’s vision of a more unified country is an electorate widely benefiting from an economic boom for which Trump claims full credit. Tax cut legislation he signed late last year has already yielded bigger paychecks for millions of Americans, Trump said.

“Since we passed tax cuts, roughly 3 million workers have already gotten tax cut bonuses – many of them thousands of dollars per worker,” Trump said. “This in fact is our new American moment.”

How Trump’s claims on the economy match the data

While some employers have publicly credited the tax cuts for recent bonuses they’ve issued, some of the money may have been paid out regardless thanks to the nation’s tight labor market and strong economy.

Democrats decried a presidency they say has ruptured the notion of shared goals of unity and equality, elevating powerful interests at the expense of working-class people who helped to power Trump to the Oval Office.

“This administration isn’t just targeting the laws that protect us — they are targeting the very idea that we are all worthy of protection,” Representative Joe Kennedy, a Massachusetts Democrat and great-nephew of former President John F. Kennedy, said in the official Democratic response.

Kennedy told CNN on Wednesday morning that "using the stock market as a barometer of economic growth is not the right measure." “It’s certainly not inclusive" or a way to guarantee working class people "a solid middle class lifestyle."

“After a long and divisive year, many Americans were yearning for the President to present a unifying vision for the country,” Schumer of New York said in a statement. “Unfortunately, his address tonight stoked the fires of division instead of bringing us closer together.”

Trump’s speech featured pitches on subjects including infrastructure, prison reform, paid family leave and funding for job training. Guests seated in the First Lady’s box included victims of gang violence and law enforcement officers wounded in the line of duty. The decision to highlight areas for possible cooperation and to frame his remarks around stories of exceptional Americans is a tacit admission that Trump was addressing a Congress and a country sharply divided by the opening year of his administration.

A few moments drew bipartisan applause — including Trump’s recognition of Representative Steve Scalise, the Louisiana Republican gravely injured in a shooting last year at practice for the congressional baseball game, and Preston Sharp, a 12-year-old boy from Redding, California, who started a movement to place flags at veterans’ graves.

But partisanship bled through. He asked Congress to give Cabinet secretaries the authority to fire federal workers “who undermine the public trust or fail the American people,” a proposal that would undercut U.S. civil service protections and would surely be fought by federal employee unions and Democrats.

Read more: A Q&A on why Trump is targeting ‘dreamers’

He took a dig at the so-called Dreamers, young undocumented immigrants brought to the U.S. as children, whose cause Democrats have championed, declaring “Americans are dreamers too.” He invoked the sacrifices of soldiers as “why we proudly stand for the national anthem,” an implicit reminder of his criticism of professional football players who have kneeled during the anthem in protest of police brutality against racial minorities.

He also elevated his criticism of prescription drug prices to a place in the annual speech, promising he would “make fixing the injustice of high drug prices one of our top priorities.”

Trump steered clear of controversial issues surrounding the federal probe into Russian meddling in the 2016 election.

He seeded nationalist themes into the speech, announcing an executive order to keep open the prison facility at the U.S. base in Guantanamo Bay in Cuba. And, noting the countries that had voted to condemn U.S. recognition of Jerusalem as Israel’s capital, he asked Congress to pass a law requiring that foreign aid “only go to America’s friends.”

And he promised to crack down on what Trump considers to be unfair trade arrangements. “America has also finally turned the page on decades of unfair trade deals that sacrificed our prosperity and shipped away our companies, our jobs and our nation’s wealth,” he said.

In striking a softer tone, the White House hopes to win back voters who appear to be abandoning the president and his party ahead of upcoming midterm elections, according to polls. Trump also seeks to encourage lawmakers in the throes of an immigration policy debate and still smarting from a dispute that led to a brief government shutdown to consider Trump’s policy priorities.

A centerpiece of the president’s remarks was his pitch for an infrastructure development plan. Trump called on Congress to pass a plan to build at least $1.5 trillion worth of roads, transit and other projects, with federal dollars leveraging state, local and private money.

As part of that effort Trump wants to streamline the gauntlet of federal regulations major projects face before construction begins. But critics warn the president’s plan doesn’t include enough direct spending, and say that his efforts to cut red tape could gut important environmental protections.

“America is a nation of builders. We built the Empire State Building in just one year – isn’t it a disgrace that it can now take ten years just to get a permit approved for a simple road?” he said.

The White House similarly believes Trump’s pitch for an immigration overhaul should win Democratic support — and that more neutral language by Trump can shift a racially-charged debate. The administration has offered to give 1.8 million undocumented immigrants brought to the U.S. as children a path to citizenship. But the trade-offs proposed by the administration include cuts to family-based immigration, what Trump calls “chain migration,” and a $25 billion trust fund for enhanced security including a wall on the Mexican border.

Even as the White House framed the president’s efforts as an attempt at reconciliation, guests of First Lady Melania Trump indicate the administration is digging in for a fight. Attendees include a law enforcement agent who has targeted the MS-13 gang, as well as parents of victims of the group. Many Democrats, meanwhile, invited immigrants who entered the country illegally as children and are facing uncertain futures after the president canceled his predecessor’s Deferred Action for Childhood Arrivals program.

Trump’s wife traveled to the Capitol ahead of her husband, in a break with recent tradition.

Foreign policy presents similar challenges. While Trump sought unity on issues of war and peace, invoking the heroism and sacrifice of service members fighting on behalf of the U.S., he faced lawmakers skeptical of his belligerent rhetoric toward North Korea and concerned by his threat to scuttle the Iran nuclear deal.

Trump celebrated success in the fight against Islamic State, saying “I’m proud to report that the coalition to defeat ISIS has liberated very close to 100 percent of the territory just recently held by these killers in Iraq and Syria and in other locations as well.”

Amid the escalating tensions with North Korea, he delivered a lengthy denunciation of the regime as a brutal and “depraved” government intent on gaining a nuclear arsenal that threatens the U.S.

“North Korea’s reckless pursuit of nuclear missiles could very soon threaten our homeland,” he said. “We are waging a campaign of maximum pressure to prevent that from ever happening.

He invoked the regime’s mistreatment of Otto Warmbier, the University of Virginia student who was arrested and sentenced to hard labor in North Korea in 2016 after he allegedly tried to steal a propaganda poster from his hotel in the capital, Pyongyang. He introduced the the parents of Warmbier, who died shortly after returning to the U.S. from injuries he sustained while imprisoned. Warmbier’s mother shed a tear as the camera focused on her.