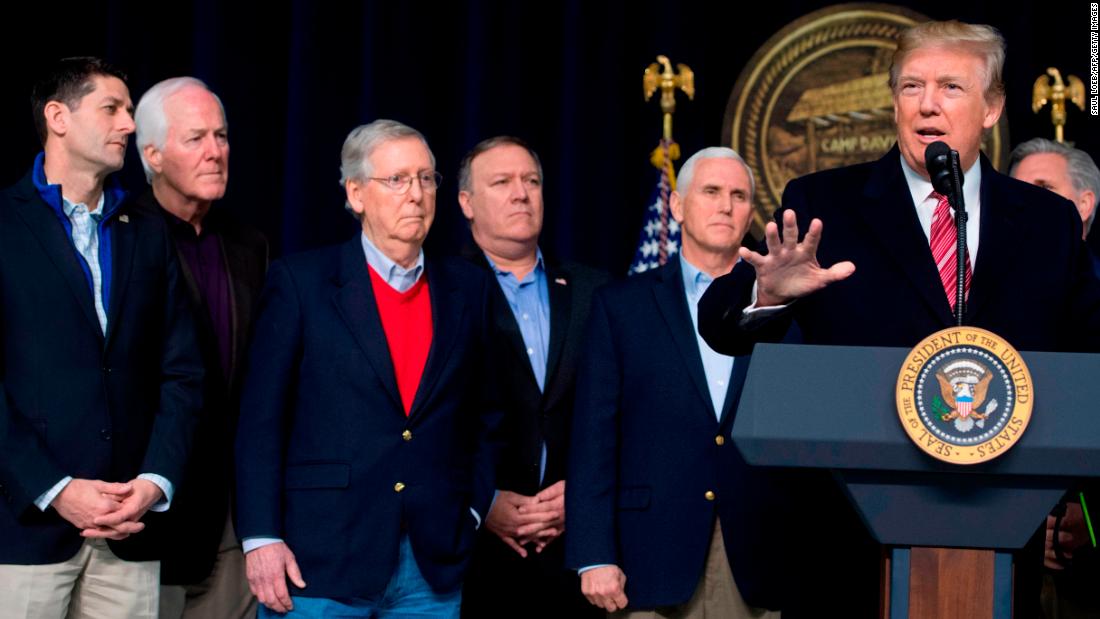 (CNN)President Donald Trump reiterated Saturday that he wants to work with Democrats to find a permanent legislative solution to allow those protected by the Deferred Action for Childhood Arrivals program to stay in the country, but only if it comes with a long-promised border wall and changes to the immigration system.

“We want DACA to happen,” Trump said Saturday. “We all, everybody, I think I can speak for everybody, we want — (Republican Sen.) John Cornyn from Texas — we all want DACA to happen, but we also want great security for our country.”
Democrats have been trying to push for a permanent DACA solution in exchange for funding the government. Trump has previously said there will be no DACA without funding for the border wall he promised during his campaign as well as changes to tighten the immigration system.
“And remember this, it’s just common sense, they’re not sending us their finest, OK,” Trump said. “When somebody gets picked in the lottery, we’re not getting the best people. So we have to get rid of the lottery system. We have to get rid of chain migration. We have to have the wall.”
Democrats have been pushing back against these requests, including the $18 billion the administration has requested for the wall and an additional $15 billion for additional border security expenditures.
Despite the spending request, Trump told reporters when asked on Saturday that he still believes Mexico will pay for the border wall — something he repeatedly promised during his campaign.
“Yes, I believe Mexico will pay for the wall,” Trump said. “I have a very good relationship with Mexico. As you know, we’re negotiating NAFTA. We’ll see how that goes. Yes, but Mexico will pay. In some form, Mexico will pay for the wall.”
The No. 2 Democrat in the Senate, Illinois’ Dick Durbin, who has been leading negotiations on DACA, criticized the administration’s budget request for wall and border security spending.
The episode prompted a shutdown warning from Durbin, with government funding scheduled to run out January 19 and a long-term budget will require Democratic votes.
“President Trump has said he may need a good government shutdown to get his wall,” Durbin said in a statement on the spending request. “With this demand, he seems to be heading in that direction. It’s outrageous that the White House would undercut months of bipartisan efforts by again trying to put its entire wish-list of hardline anti-immigrant bills — plus an additional $18 billion in wall funding — on the backs of these young people. Bipartisan negotiations continue in good faith among senators who understand what is at stake, and I will continue my efforts to reach a bipartisan agreement.”