Representative Adam Schiff, the ranking Democrat on the House Intelligence Committee, said the majority-Republican panel decided to seek release of the memo on a party-line vote. The Republican majority refused along party lines to disclose a competing memo written by Democrats.

“This is an effort to circle the wagons around the White House and distract from the Russia probe,” Schiff said.

Committee Republican Mike Conaway of Texas, assigned to head the probe of election-meddling by Russia, said “yes,” when asked if he was confident that releasing the memo wouldn’t endanger national security. He said the Democratic memo might be released at a later time.

Schiff said the committee’s majority has also voted to open an investigation of the Justice Department and the Federal Bureau of Investigation. Conaway rejected that characterization, saying oversight of the agencies was always part of the committee’s duties.

The Democratic lawmaker said the investigation of election-meddling by Russia continued. Conaway and Schiff said former White House strategist Steve Bannon was expected to appear before the panel behind closed doors Wednesday.

Releasing the memo has become a cause for conservative congressional Republicans, who say the FBI and the Justice Department pursued the investigation of possible Russian ties to the Trump presidential campaign under false pretenses. Schiff has countered that the memo is part of a Republican effort designed to distract from, and undermine, Special Counsel Robert Mueller’s investigation into Russian election interference and whether those around Trump colluded in it.

Disclosure of the memo requires White House approval because the document is based on classified information. Now, the Trump administration will have up to five days to review the document for national security concerns, though it could be released at any point. Even if the administration objects, the full House could hold a rare closed-door vote on whether to publicly disclose the memo anyway.

Once the White House receives the memo — either late Monday or sometime Tuesday — it would receive a detailed review, according to a person familiar with the process. The review might involve redactions before the president approves or disapproves its release, said the person, who requested anonymity to discuss a sensitive matter.

FBI Director Christopher Wray has been allowed to read the memo, and it’s now being vetted in consultation with the Justice Department, according to a person familiar with the matter. Associate Attorney General Stephen Boyd warned last week that it would be “extraordinarily reckless” to release the memo because it contains classified information.

Schiff said Wray told him he wants to brief the Intelligence panel on concerns regarding release of the memo, but Republicans rejected the Democrats’ request to hear from him. “They were not willing to meet with the FBI director,” Schiff said.

“When you have a deeply flawed person in the Oval Office, that flaw can infect the whole government, and today tragically it affected our committee,” Schiff said.

The memo was written by Republican staff members led by Intelligence Committee Chairman Devin Nunes of California and member Trey Gowdy of South Carolina. It was based on classified material obtained from the Justice Department and Federal Bureau of Investigation with House Speaker Paul Ryan’s backing.

Three House lawmakers who have read the document said it claims that FBI officials didn’t provide all the relevant facts in requests made to a Foreign Intelligence Surveillance Act court to obtain a warrant or warrants on Carter Page, a Trump campaign associate and former investment banker in Moscow.

The three lawmakers said the memo contends a judge might not have approved the request for surveillance aimed at Page if the FBI revealed that it used an unverified dossier on Trump put together by a former British spy, Christopher Steele, and that he had been hired by an opposition research firm funded in part by Trump’s opponent, Hillary Clinton, and Democrats.

A QuickTake Q&A: What Might Happen if Trump Orders Mueller Fired 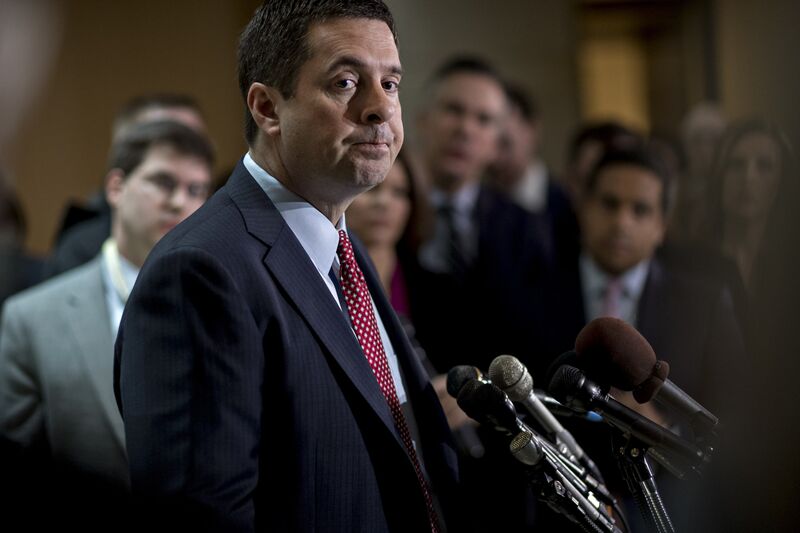 Last week, Schiff, a representative from California, said Democrats on the committee would write their own memo “setting out the relevant facts and exposing the misleading character” of the Republican account.

Before Monday’s vote, White House Press Secretary Sarah Huckabee Sanders said that no one at the White House had seen the memo and “we’ll make a decision when and if that time becomes necessary.”

Ryan will defer to Nunes on the memo’s public release “and process,” AshLee Strong, a Ryan spokeswoman, said on Monday. The Intelligence Committee has already let House members read the memo.